Blog
You are here: Home / Blog / Home Owners / The Move Down Trap

People in their 40s, 50s or 60s commonly buy a “trophy house” while they are working and have a family, with the intention of “moving down” when they retire.  This can work fine if the “trophy house” is paid for, along with all other debt, before the buyer stops working.  If not, then the trap can be not enough equity to make a “move down” economically viable.  Let me give you two recent examples: 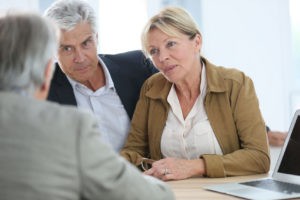 George wanted to sell because he decided they could not afford to keep the house.  He hoped to buy another home without a mortgage, using the cash from the sale and perhaps adding a little to it.  Typically a seller will have to pay about 10% of the sale price in closing costs, commissions, repairs, moving expenses, and other miscellaneous costs.  In this case, a $329,500 sale would result in $32,950 in costs and $210,000 mortgage payoff, leaving about $86,550 cash to George.  If he adds about $40,000 cash, he can afford to pay  $125,000 for a home.

With $40,000 cash and a reverse mortgage, on the other hand, he could stay in the original home.  I estimate the cost of taxes, insurance, and maintenance on this 2092 square foot ranch-style home at about $500/month.  George may be able to find a much older condo to live in for $125,000, but taxes, insurance, and maintenance probably won’t be much different than in the $329,500 house.  In many cases, for the price of HOA fees on a condo, a homeowner can hire people to do the lawn care, snow shoveling, and other exterior maintenance.

If George decides to rent instead of buy, it’s likely his rent will be significantly more than $500/month, and the $86,550 proceeds of the sale will dissipate quickly.

I recommend that people moving in their 40s or 50s consider homes that they can sustain into retirement.  I understand that a bigger and more expensive home is always attractive, but being forced to choose a less expensive one as a result of financial pressure can have a disappointing outcome.

Why You Should Review Your Mortgage Twice Yearly Too late to buy?
Scroll to top